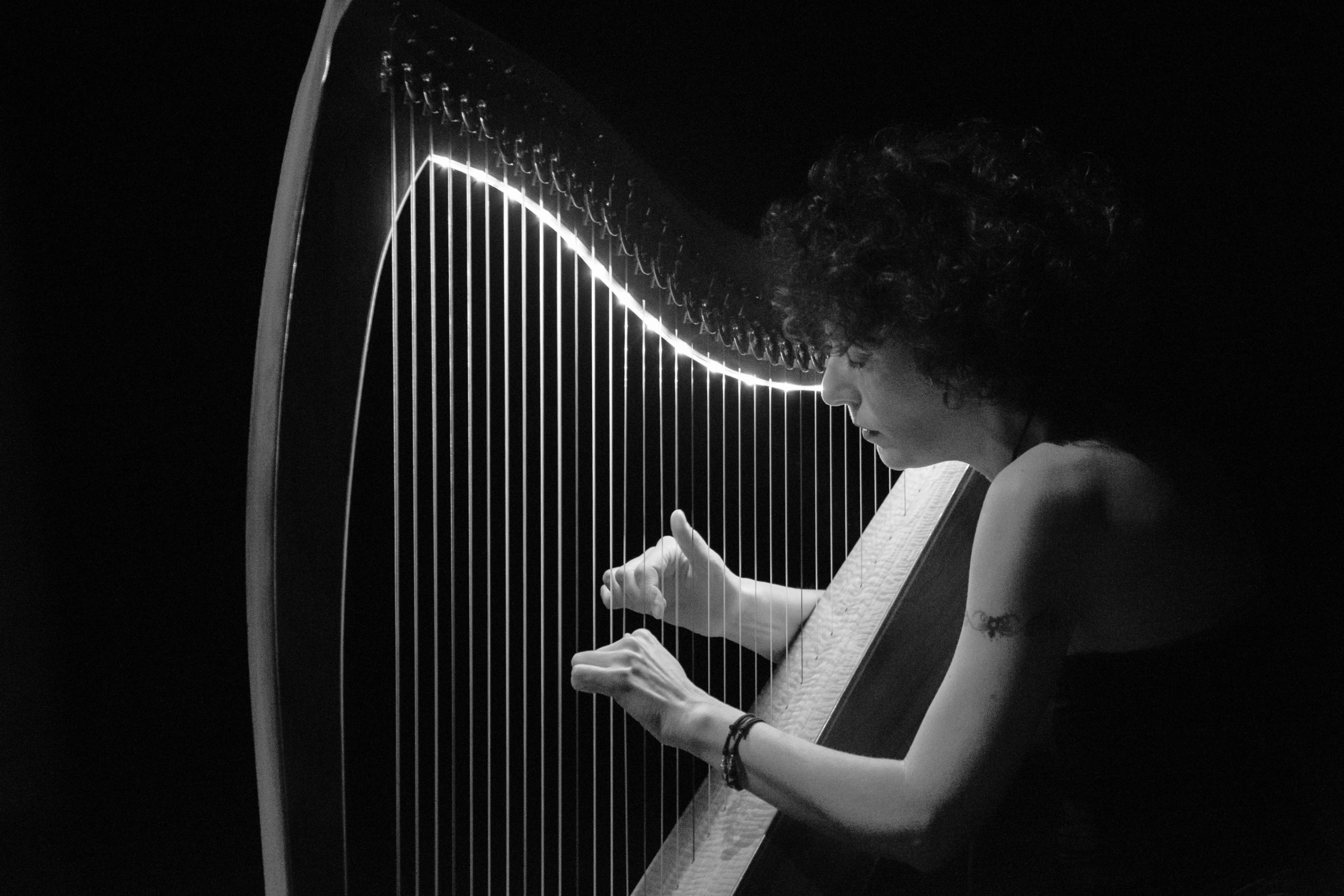 She started playing the Celtic harp in May 2010, attending two cycles of courses taught by Enrico Euron and Anne-Gaelle Cuiff in Pinerolo and Turin.

In the Autumn of 2014, Federica attended a cycle of Jazz harp courses taught by Marcella Carboni at Atelier Salvi in Milan. During this period, she also started taking private lessons with Ludwig Conistabile – a professional harpist and teacher at the Musicoterapia Arpamagica School in Milan.

Since 2015, she has been attending a master’s in harp therapy – sound relaxation techniques and storytelling on sonorous landscapes techniques – conceived and lead by Ludwig Conistabile at the Musicoterapia Arpamagica School in Milan.

From October to December 2015, Federica attended a songwriting course taught by Federico Sirianni at the Holden School in Turin. She has been performing in different formats and various places – clubs, squares, courtyards.

In March 2016, she participated in a contest in Turin and met poet Valentina Perucca, together with whom she started a collaboration and created the format “Arpoesia.”

She entered the contest “San Salvario District – fashion moda e design” and won the best performance award with painter Claudio Bellino and dancer Viola Scaglione. With Claudio Bellino, she also participated in the Festival dei Due Mondi in Spoleto from July 8 to 10, 2016.

In September 2016, she participated in a contest in Turin, in the event “Marinai: Leggende e Capitani” at Palazzo Tursi (Genoa) with Igor Chierici and other musicians on the occasion of Genoa’s “Salone Nautico,” and – as a soloist – in the concert “Concerto in Quota,” organized on Mount Tobbio by the association MyTrekking in Genoa.

In the Autumn-Winter of 2016, she performed in clubs and squares both as a soloist and in collaboration with various artists.

In May 2017, she started collaborating with Balletto Teatro di Torino for the piece “Concept #1,” which they performed during the summer and BTT’s 2017-2018 season.

In July 2017, Federica participated in the Experimental Film Virginia. For that occasion, she performed live as a soloist, and with the BTT dancers in “Concept #1,” she featured as an extra in Matthew Jones’s short-film “When You Leave” and composed its soundtrack.

Since August 2018, she has been a cast member in the theatrical show “La Leggenda di Moby Dick” (directed by Igor Chierici and Luca Cicolella), sponsored by the City of Genoa and Fondazione Garaventa (Genoa).